Seen Napping at the Beach Today!

This monk seal showed up at Anaeho’omalu Bay today. Based on the photo, she appears to be enjoying a nap on the 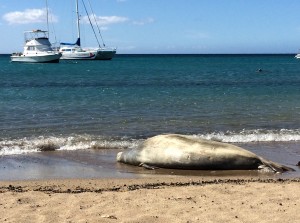 shoreline. And while we absolutely love to see this endangered animal, the folks at NOAA tell us that overall, her species isn’t doing so great.

According to NOAA’s Office of Protected Resources, the Hawaiian Monk Seal is “one of the rarest marine mammals in the world”. Males grow to about 7 feet long and females to 7.5 feet long (that’s called “reverse sexual dimorphism” – Humpback whales demonstrate the same relationship). They feed on benthic (animals living at the bottom of the ocean) fish and invertebrates – and in turn, are preyed upon by Tiger and Galapagos Sharks. There are probably fewer than 1,100 Monk Seals left in the world, though the population around the main Hawaiian Islands seems to be increasing slightly. Hawaiians called Monk Seals “Ilio holo I ka uaua” which means “dog that runs in rough water”.

When this seal came ashore, we notified our local NOAA reps. They came down and made sure she got some privacy

Often people approach endangered species out of curiosity, and many people don’t even realize their behaviors may constitute harassment and cause stress to the animal. Since people can behave unpredictably too, if you see an endangered animal, we always recommend first informing someone around you who’s acting in an official capacity (life guard, boat captain, etc.). And you can also call the NOAA Office of Law Enforcement Hotline at (800)853-1974 and the DLNR Statewide Hotline at (808)643-DLNR.