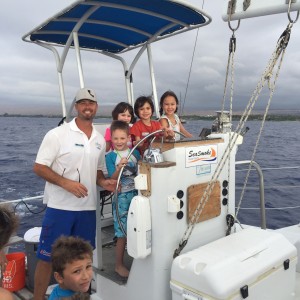 We operated a couple of different Whale Watching Cruises on Wednesday. On our 8:00 Wake up with the Whales Cruise, we spent considerable time watching two relatively small Humpbacks diving and surfacing off or Puako. These whales were definitely in sync with each other as they surfaced together over and over and over again. On the 10:00 Whale Watch from Kawaihae we got to see spouts from 6 different adult humpbacks. None of them were acting aggressively though a couple of them were diving and surfacing together. Captain Keno was able to position the boat so that we were able to see plenty of long, slow fluke dives. Getting to see the underside of a Humpback’s flukes is always a treat…and it’s important to the whale researchers (see the “fact of the day” below).Oh…and at one point one of the whales surfaced about 50 yards from us…checking us out maybe?
Mahalo,
Claire
Captain Claire’s Humpback Fact of the Day: One of the best ways whale watchers have to identify individual Humpbacks is by the unique markings on the ventral (underside) of their flukes (tails). Currently, the National Marine Mammal Laboratory based in Seattle maintains a data base containing more than 30,000 photos of the North Pacific Humpbacks flukes, but other researchers, including those involved in the 3 season SPLASH (Structure of Populations, Levels of Abundance and Status of Humpbacks) project have also used these patterns to identify who’s who in the whale world and estimate Humpback population levels.