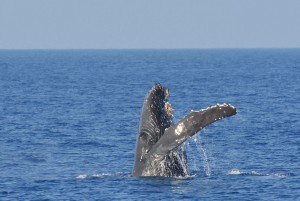 We had some great sightings on our Friday Wake up with the Whales Cruise, Not only did we have 4 whales swim literally 30 feet beneath our boat (visibility was great, so we could see all of them very clearly), but we also got to hear some very loud singing when we deployed the hydrophone. Later in the cruise, we got to watch a fairly small mom (she was only about 35′ long) with her very young calf. Baby apparently had a lot of energy to burn, because we watched him breach more than 10 times about 200 yards from out boat. These two were accompanied by a very large escort, who made a few appearances at the surface. Besides the close-by antics of our hyper-active calf, we saw spouts from more than 20 other whales and even a couple of breaches in the distance.
On our 10:00 Cruise, we also saw spouts from about 20 different Humpbacks. It seemed to be a fairly mellow time of day for them, and we watched a lot of surfacing, spouting and sounding. When we deployed the hydrophone during this cruise we also heard some very loud and clear singing. Though we were never able to pin point the singers, they must have been very close by.
The action picked up again for our 3:00 Sail with the Whales Cruise. We were approached by some very curious whales who spent several minutes right under us. We got great views of them as they rolled over and upside down. To top it off, we witnessed several full breaches from other Humpbacks just as we were ending our cruise.
Mahalo and have a wonderful weekend. I’ll send out a recap of our weekend sightings on Monday!
Claire
Captain Claire’s Humpback Fact of the Day: To our untrained ears, the sounds we hear from our hydrophones sound pretty random, though we have noticed the lack of certain phrases this year that we heard fairly often last year. According to a paper published in the journal Current Biology, it turns out that our ears aren’t so untrained after all. Researchers have documented that the Humpback songs in the South Pacific are actually changing really quickly. Over the last decade, completely new song themes are appearing within a season. The researchers compared the radical evolution of the Humpbacks’ songs to human musical composition, suggesting that the themes are so novel; it’s as if whole new human musical genres were appearing that no one had ever heard just a few years ago.