On our Tuesday Wake Up with the Whales Cruise on Seasmoke we found ourselves in our favorite dilemma. With two Humpbacks spouting  on our port side and another two Humpbacks spouting on our starboard side, which way do we look? We also had an opportunity to deploy our hydrophone during this cruise, and while we were listening to some singers, a Humpback surprised us by surfacing just 50 yards away from us. This whale was moving quickly, and though we pulled up our hydrophone and started the engines to see if we could see him again, he outdistanced us with little effort. We also got to see some huge splashes as a couple of other Humpbacks breached about a mile away from us.
In the afternoon, we operated three short cruises for an exclusive group. Though the trips only lasted 45 minutes each, we did see whales during all of them including a couple of competitive pods, some pec slapping, lots of spouts and lots of flukes.
Mahalo,
Claire 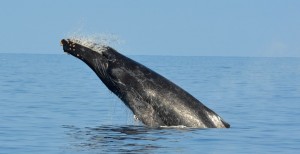 ​Mahalo to Gary for sharing this image!
Captain Claire’s Humpback Fact of the Day: In the early part of the 19th century, whales were hunted for more than just their blubber (which was used primarily as lamp oil). The meat was used mainly for fertilizer, the baleen was used for umbrella and corset stays, and their organs were processed to extract vitamins.