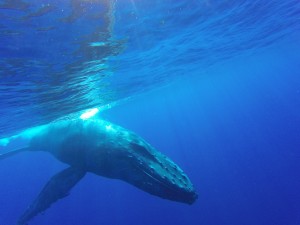 Humpback under the boat…courtesy of Crew Member Extraordinaire, Greg (and his Go-Pro)

What a weekend of whale watching! On Friday’s Wake up with the Whales Cruise patience paid off for our guests on Manu Iwa. It took us awhile to find the whales, so when we finally saw some spouts about 200 yards from us, we stopped the boat to see what would happen. We lowered our hydrophone, and were very surprised that while we were sitting and listening, 2 big Humpbacks came over to us to investigate. They stayed with us, spouting, and then diving right underneath us only to pop up on a different side of the boat. We finally had to go…and took advantage of one their dives to start the engines. As we were driving away, they began breaching. Of course we had to stop to watch them, and after 4 breaches, they paused…so we took off again. As soon as we left, they start breaching again…we just couldn’t leave that kind of activity, so we turned back and watched multiple breaches, finally arriving back to our mooring 20 minutes after we were supposed to have finished the cruise

And the fun continued on Saturday. Guests on the Wake up with the Whales Cruise saw every activity in the book — and all at close range. We saw pec slaps, chin slaps, tail lobs and even breaches. At the end of the cruise, a Mom/Baby pod found us — baby was curious, and Mom was pretty permissive. The two approached us and then just lay right under the surface of the water, right next to us. We could see every inch of both of them…amazing.
Finally, on Sunday, we were barely out of the harbor on our 10:00 Cruise when we saw some whales breaching. We headed over and watched them breach no less than 10 times (and these were big whales). These three seemed to be in some sort of competition, and we saw them peduncle throw right on top of each other. We’re normally not violent people, but watching this “whale fight” was absolutely mesmerizing, and it went on for more than 45 minutes. Later in the cruise, we got to see a different pod comprised of momma and her baby swimming calmly along the surface.
Hope you enjoyed your weekend,
Claire
Captain Claire’s Humpback Fact of the Day: Though the Humpbacks we see average between 40 and perhaps 50 feet long, there is anecdotal evidence that the largest Humpback killed by whalers was 88 feet long. This Humpback was taken in the Caribbean.