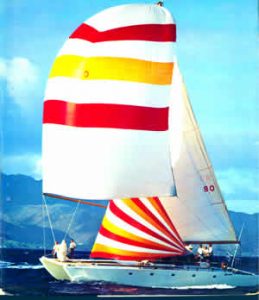 Help us celebrate the 50th birthday of our flagship, Seasmoke.
Commissioned in 1966 by James Arness (you may remember him as Marshall Matt Dillon from the TV show Gunsmoke), Seaamoke was designed and built by Rudy Choy of C/S/K Catamarans to be the fastest boat on the water. And she was…she won all the races she entered and even set new speed records in the Molokai Channel!
After James Arness tired of racing (and winning), he gave Seasmoke to the Sea Scouts…and in 1978, our own Captain Will Ward helped to sail her to the Big Island. 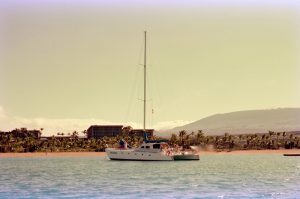 Ocean Sports acquired her in 1981 when we first opened up operations. She left us for Maui in 1984, but we got her back again in 1993…and we’re never letting her go!
2017 is a big year for our Seasmoke — she’s played a big role in our lives, and we plan to celebrate her with stories and photos and even a few contests!
But our SEASMOKE adventures are really YOUR SEASMOKE adventures…we invite you to share in the celebration…send us your stories and photos too!
Hau’oli la Hanau SEASMOKE! We love you!