Our Friday the 13th Wake up with the Whales started off with the luckiest of sightings…a pod of flipping and spinning Spinner Dolphins just outside of Anaeho’omalu Bay! We also saw spouts from several lone whales who were just spending about 30 seconds at the surface before sounding…and 3 different breaches in the distance. On Friday’s Whales and Cocktails at Sunset Cruise, we saw a spout immediately after leaving the harbor and headed to the area. The whale had sounded by the time we got there, but we stopped and waited…and he ended up surfacing about 25 feet off our stern! Later in the cruise we were a watching a pod of two whales who had surfaced…we started making lots of noise, shouting and encouraging them to come check us out, and they did. They swam right towards the boat, dove underneath and surfaced on the other side. Just as the sun was setting, one of them sounded, lifting his huge flukes into the sunset.
Saturday we woke up to the biggest surf any of has seen in a long time, so our Anaeho’omalu Bay Charters cancelled, but we were able to take out Alala from Kawaihae at 10:00, and we were really glad we did. Besides spouts and flukes from Humpbacks in every direction during the cruise, we also saw several episodes of tail lobbing and a couple of peduncle throws from various whales in pods of two about 400 yards away from us. We never got close to any of this wild surface activity, but Captain Kimo seemed to have some sort of psychic connection with the whales. On three different occasions while we were stopped, we were surprised by whales surfacing right next to the boat. The closest pass was by a couple who spouted just 20 feet off our bow…but we also had a couple of other whales surface and cruise right past us off the port side, and some others that cruised past our starboard side.
A 5 year old aboard Sunday’s Wake up with the Whales Cruise coined the word of the day…”Wowee”! Besides plenty of spouts and flukes (many very close to us), towards the middle of the cruise we found ourselves sandwiched between two competitive pods…one with 3 whales and one with 4. Our tri-pod amazed us with a single breach followed by several single and double pec slaps. Not to be outdone, one of the whales in our foursome countered with a single breach, and then we got to see a double breach! We also got to watch them all charging around, trumpeting, head lunging, jaw clapping and we even saw some throat inflations. We started our 10:00 Whale Watch Cruise accompanied by a pod of 80 or so Spinner Dolphins. We also saw Humpbacks on all sides of us, including two pods of two who surfaced on opposite sides of us, alternating every 8 minutes, so it seemed like we always had something to look at.
We hope your weekend was as fun as ours!
Claire 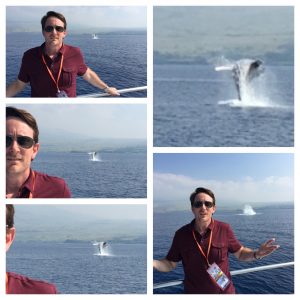 Mahalo to our new friend and guest Kristin for submitting this series to us which she titled “What’d I miss?”.

Captain Claire’s Humpback Fact of the Day: Most Humpbacks are “right-handed”. Researchers looking at abrasions on Humpbacks’ jaws found more abrasions on the right jaw than on the left, and observed more “flippering” with the right flipper than with the left, suggesting a definite right-side preference among the Humpback population.