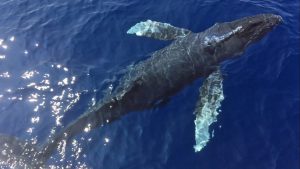 Mahalo to our good friend Caroline F. for sharing this image of a Humpback calf paying us a visit!

We had some fun Whale Watch Cruises over the weekend.
Friday’s Signature Whale Watch Cruise started out kind of slow as we searched for spouts. We found a couple of different competitive pods though, and it ended up being a great day with lots of double breaches, tail lobs, and pec slaps.
The whale songs were incredible on Saturdays’ Wake up with the Whales Cruise, and so were the sightings. The wind was calm, so the ocean was flat, and we were able to see spouts and dorsal fins and even some flukes from more than 15 different whales. Not all of them were in the distance though — we found ourselves the object of curiosity for a small calf who came over to take a look at us. Mom and the escort (both huge whales) swung by too…and all of them were on the surface for a long time, giving us some great views of them as they checked us out.
On Sunday’s 10:00 Whale Watch Cruise from Kawaihae, we found 3 different Mom/Baby pairs, including one pair that was surrounded by a pod of Spinner Dolphins for the entire half hour we watched. We also got to watch a different Mom and calf breaching (we wondered if baby was trying to copy what Mom was doing…or if everyone was just excited). And to top it off, a third calf decided to investigate our boat, and his mellow Mom didn’t object!
Mahalo,
Clalre
Captain Claire’s Humpback Fact of the Day: The haunting song of the Humpback has actually traveled beyond our oceans. In 1977, NASA launched two Voyager space crafts. Aboard each was a golden record with a collection of sights, sounds and greetings from Earth in 54 different human languages. These records also include greetings from Humpback whales! And that was just the first time the whales’ song traveled beyond our planet…On Earth Day (4/22) in 2005, a private organization called Deep Space Network broadcast a live feed from a hydrophone off the coast of Maui of the Humpbacks singing. They used a five meter parabolic dish antenna and broadcast the sounds about 18 trillion miles into deep space. So far, we’ve yet to receive a response!