Final Update of the Season 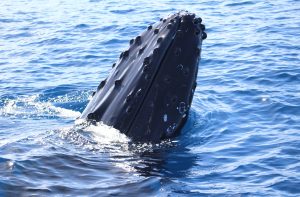 With just two more days to go in our 2016/2017 Whale Watch Season, it’s time for me to send out a Mahalo Nui Loa to all of you who have read and commented on our daily Whale Watch Updates. It’s been a pleasure sharing the season – and the sightings –  with you!
Our last two Whale Watch Cruises of the season will take place on Friday and Saturday, so this will be my final report.
Some great things happened this year, certainly not the least of which was the official de-listing of the Humpbacks in our part of the ocean from the Endangered Species List by N.O.A.A.!
We also learned a few things this season about the ways Humpbacks communicate…and we loved it that the researchers’ observations validated our anecdotal observations of increased incidences of breaching and other surface behaviors correlating with increased distance between whales, with whales joining or leaving a pod, and with increased wind speeds.
We saw some things this year that were new to us too…we watched one whale rest his “chin” on the back of another whale…we saw sub-adults on a few occasions feeding (at least that’s what we think they were doing)…and we heard some very different sounds and song phrases through our hydrophone. We’re hoping the Humpbacks saw some new things too, as they approached us closely on countless occasions, clearly looking at all of us.
All in all, this season has been wonderful, and we hate to see it end.
A hui hou kakou…
Mahalo from all of us at Ocean Sports