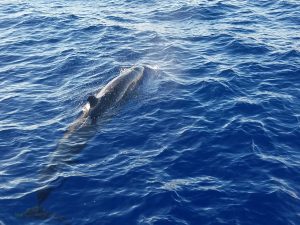 Guests joining us on Saturday, August 12th’s Cocktails at Sunset Cruise experienced a real treat when we encountered some rare visitors at sea.

The trade winds had been blowing all day long, so when we left the harbor Captain Kimo decided the wisest course of action would be to stay in the lee provided by the Kohala mountains (and we’re so glad he did).

As we were cruising down the coast enjoying some snacks and cocktails, our crew members Greg and Pono’i saw something big bobbing up and down at the surface, so of course, we went over to investigate. Turns out it was a huge buoy that had broken loose from somewhere. It was so big that we suspected it was one of the FAD  (Fishing Aggregation Device) buoys placed by the State of Hawaii. We took some photos and tried to figure out who to contact to pick it up as it could definitely be a hazard to navigation —  and it was so big we couldn’t do anything with it ourselves. 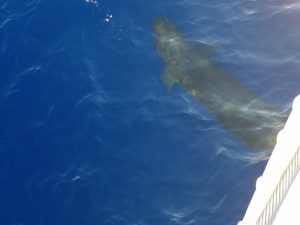 Though it was kind of difficult for us to tell for sure, we think there were 4 in the pod, and they hung with us for more than 15 minutes. We got loads of photos, and quite frankly, we were amazed when they chose to ride our bow wake.

We’ve since contacted Robin Baird from Cascadia Research Collective. He and his organization have been studying 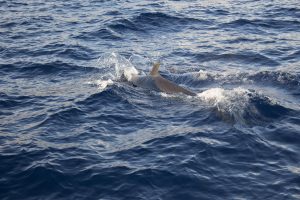 the toothed whales living around Hawaii since 2000. We forwarded our photos to them…and they promised to let us know if they can identify any of the individuals we saw.

What a night…and what an adventure! Of course we can’t promise this will happen to you…but we invite you to join us on any of our daily catamaran cruises, and who knows…maybe you’ll win the adventure lottery with Ocean Sports!

A big Mahalo to Greg and Pono’i for providing us with the info and photos for this report!

Ocean Sports
Experience you can trust…locally owned and operated since 1981!