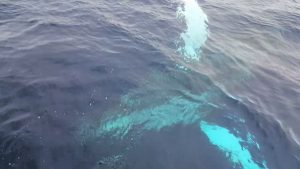 The Humpbacks are continuing to arrive off shore of the Kohala Coast. On Tuesday’s Signature Whale Watch, we found a lone Humpback off of Puako. This whale was surfacing, spouting, and then showing her flukes as she began her 23 minute dives. We watched her through several dive cycles, and though she didn’t come up right next to the boat, we did get a couple glimpses of that beautiful turquoise reflection off of her white pectoral flippers when she was right below the surface.
On Wednesday’s Signature Whale Watch, we also found a lone Humpback. This whale was diving much more shallowly between breaths than Tuesday’s whale, so we never got a good view of his flukes. And unlike our Tuesday whale, his dive times varied quite a bit. Sometimes he was down for about 10 minutes before surfacing, and other times we had to wait almost 30 minutes before seeing him. His unpredictability made us really wonder what he was doing down there!
Mahalo,
Claire
Ocean Sports Whale Fact of the Day:  When you see the spout from a whale, you’re actually looking at an interesting combination of things. Some of what you’re looking at is condensation from the whale’s lungs (the same thing you’re looking at when you see your own breath after exhaling in a cold environment); some is atomized ocean water (Humpbacks live in a wet world, and there’s always some of the ocean pooled on top of their blow holes when they surface); and…since Humpbacks don’t have cilia in their respiratory tracts (little hairs)…a lot of what you see (and occasionally feel) is actually mucus! Yuck!