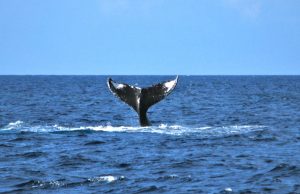 Aloha,
On Saturday’s Wake up with the Whales Cruise we saw some action to the north of Anaeho’omalu Bay, and way out to sea…but decided to try our luck finding whales closer to shore. Our decision paid off when we found a pod of two Humpbacks near the Mauna Lani Hotel. We watched them spout and dive (one showed his flukes), and after waiting around for them to surface, we got to see another cycle of spouting. This time, seemingly out of nowhere, one of the pod did a peduncle throw. Since we were further away from him than the other whale was, we presumed the throw was directed at that other whale. On the way back to the bay, we saw more action offshore, but didn’t have time to check it out.
On Saturday’s Whales and Cocktails at Sunset Cruise, we got the opportunity to see a lone Humpback about 150 yards away from us off shore of the Mauna Kea Resort. This whale spouted a few times before sounding. We have no idea where he went after he dove…if he did surface again anywhere near us, we must have all been looking the wrong direction!
Patience paid off for us on our Sunday Wake up with the Whales Cruise as we finally found a pair of Humpbacks way off shore of Keawa’iki (south of the bay). These whales surprised us with several close encounters; surfacing 75 yards from our 11:00, and then just about 25 yards off our 5:00, before swimming right alongside our starboard hull and sounding. On the way back to the bay we saw spouts from another pod of 2 a couple of hundred yards away, and then just before we got back, we were completely surprised when a BIG humpback surfaced about 20 yards off of our 11:00. Of course Captain Pat immediately put the boat into neutral, and we all got wonderful views as the whale cruised past, and right down our port side.
Mahalo,
Claire
Ocean Sports Whale Fact of the Day: According to the experts at NOAA, in 1966 when commercial whaling was finally banned, the Humpback population in the North Pacific was estimated to be fewer than 1400 individuals.