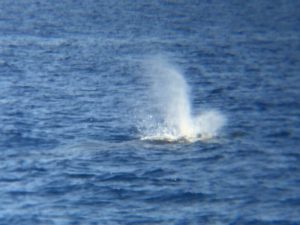 Aloha,
People often ask us if there’s a “best” time of day to see the Whales.
Of course, we don’t have a definite answer, but on Wednesday’s Snorkel and Whale Watch Adventure Cruise, we saw 2 Humpbacks right after we left Anaeho’omalu Bay at 10:30. We got to see them pec slap a few times before we had to leave them to head for our snorkel site. It’s always difficult for us to leave the whales, but we weren’t disappointed for long because on the way to the site, a pod of Spinner Dolphins came over to check us out. And then, after we finished snorkeling and lunch, and were sailing up the coastline, we saw two Humpbacks again (probably the same pair from before) — and this time got to see each of them breach.
On Thursday’s Wake up with the Whales Cruise we found a solo whale, who spouted and then took a long dive (35 minutes- we timed him) before coming up to spout a couple more times before diving once again. When we deployed our hydrophone, we picked up some very faint singing (the first we’ve heard all year). Even though our guests did get to see and hear whales, it wasn’t “good enough” for us, so we called it a “fluke” and invited everyone to join us again on another cruise for FREE!
Have a great weekend — I’ll send out the next Humpback update early next week.
Mahalo,
Claire
Ocean Sports Whale Fact of the Day: When a Humpback spouts, he’s exhaling in a half of a second, 90% of the volume of air in his lungs. It’s enough air in one blow to fill up the interior of a stretch limousine. In case you’re curious, when an average size human adult exhales, he takes 3 times as long to exhale just 15% of the volume of air in his lungs — and an adult human exhalation wouldn’t even fill up a Smart Car — it’s only enough air to fill up a lunch bag.