Spy Hop, Competitive Pods and 1st Calf of the Season! 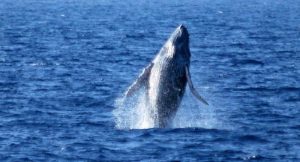 Aloha,
Hau’oli Makahiki Hou!
We had some great experiences watching whales this past weekend.
Highlights included sightings of 10 different Humpbacks and 5 separate breaches on our Friday Wake up with the Whales. We also got to see a Humpback swim directly under us and then spy hop right next to us!
On Friday’s Signature Whale Watch we were surrounded by Spinner Dolphins almost immediately after leaving the harbor, which is always a lot of fun. Throughout the course of the cruise we saw more than a dozen Humpbacks, but were delighted on several occasions to see whales surfacing anywhere from 20 yards to 150 yards from our idling boat.
On Friday’s Whales & Cocktails at Sunset we also saw about a dozen whales including one who breached 5 times, and one pod of two who surfaced about 55 yards from us to spout and sound.
On Saturday’s Wake up with the Whales Cruise AND Snorkel and Whale Watch Adventure Cruise we saw lots of whales close up — they just kept surfacing near us! Lots of startling blows (at least we were startled) and lots of beautiful fluke shots. Though we saw lots of different Humpbacks on our Saturday Signature Whale Watch (including a few who surfaced fairly close by), the highlight of the cruise was watching a newborn calf with her Mom. This is the first calf we’ve seen this season, and she (or he?) was really cute, surfacing frequently, and occasionally resting on Mom’s rostrum (head). At one point, Mom let her approach us to just about 50 yards before she took her away. After that, they were joined by a third whale…but Mom tolerated his presence. We found Mom and Baby again on our Whales & Cocktails at Sunset Cruise and watched baby breaching repetitively. We also saw spouts from many, many more whales, and watched a pod of two mature Humpbacks just 100 yards from us as they surfaced, spouted and sounded.
On Sunday’s Wake up with the Whales Cruise, we found ourselves in the midst of a competitive pod of 3 whales — lots of pec slapping, tail lobbing, and peduncle throws from these 3. And they kept diving and surfacing all around us! And finally, on our last cruise of 2017, our Signature Whale Watch, we saw plenty of spouts here and there but focused our attention on a pod of two very active whales who first caught our attention with a bunch of breaches and tail lobs. By the time we caught up with them, they were cruising at a good clip, but surprised us several times by surfacing at our stern.
Mahalo,
Claire
Ocean Sports Whale Fact of the Day: The gestation period for a Humpback whale is about 11 months, which means the calf we saw on Saturday was conceived last winter. We can only estimate gestation because oddly, researchers have never observed the same female mating and then giving birth (in fact, there’s no documented observation of humpback copulation or calving at all)!