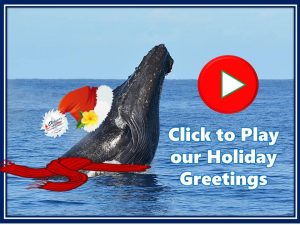 Aloha,
Lots to report from our weekend of Whale Watching, so I’ll get right to it.
The seas were kind of lumpy and bumpy on Friday, but guests on our 10:00 Signature Whale Watch didn’t mind the conditions when they got to see two breaches and a pec slap or two from a pod of three whales. We also got to see Manta Rays cruising around on the surface (always a treat), and spouts and a splash from a breach that most of us missed because we were focused on where we thought the whale was, but he fooled us). We couldn’t miss the breaching on Friday’s Whales & Cocktails at Sunset — after watching several 17 minute simultaneous surface/dive cycles from two Humpbacks, we were surprised when one of them decided to breach about 40 yards from our 3 o’clock, followed by another breach from his buddy…and it kept going on for a total of 12 breaches (some simultaneous) right next to the boat! When the whales tired, they dove…but then surprised us when one surfaced at the bow and the other at the stern for a spout or two before disappearing and then reappearing together on the surface, and then sounding simultaneously. Unbelievable.
Throughout the course of Saturday’s 10:00 Signature Whale Watch, we saw 7 different Humpbacks fairly close by including a pair of juveniles who surfaced near us several times. We also saw breaching and pec slapping further out to sea. On our Snorkel and Whale Watch Adventure Cruise we also got to see some breaches, and watched a pod of two surface about 100 yards from us. While we were snorkeling, we could definitely hear some singing going on. And on our Whales and Cocktails at Sunset Cruise, we were delighted to watch a pod of two whales spout 6 times on the surface about 100 yards from us before showing their flukes for 20 minute dives. We also saw lots of spouts in every direction further away from us.
Sunday’s Wake up with the Whales Cruise began with sightings of whales before we even left the bay! Before we could get to the whales, we found ourselves surrounded by Spinner Dolphins, but eventually made our way out to see the Humpbacks. Turns out it was a pod of 3 (joined by a fourth later on) who were battling it out at the surface. We saw pec slaps, peduncle throws, tail lobs, head lunges, and surface rolls. They swam under us and all around us for almost the entire cruise. To top it off, we were escorted by the Spinner Dolphins again as we made our way back to the bay. Finally, guests on Sunday’s 10:00 Signature Whale Watch Cruise got to witness a bit of a fight, as 5 Humpbacks cruised around on the surface in a competitive pod. We saw lots of tail lobs, pec slaps and breaches…and even watched some “motor-boating” (picture a 45 foot long Humpback swimming fast with his head partially lifted).
Mahalo,
Claire
Ocean Sports Whale Fact of the Day:  A fully grown Humpback Whale can hold his or her breath for around 45 minutes. Usually, that’s not what we observe in Hawaii though. We’re more likely to witness 10-20 minute breath hold dives, and if the whale is really active, s/he surfaces to breathe a lot more frequently.