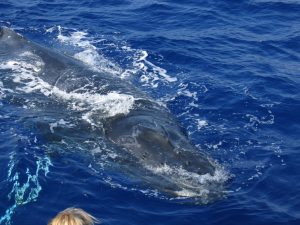 Aloha,
What’s going on in the world of Whale Watching since our last update? Turns out, quite a bit!
On Thursday’s Wake up with the Whales Cruise we spent over an hour watching a pod of 2 Humpbacks spouting, sounding, and diving for 20 minutes before surfacing again about 100 yards away. We got to watch them through 3 cycles, and each time they surfaced, we got some great views.
On Friday’s Private Snorkel Cruise on Alala from Kawaihae, guests watched a lone Humpback surface and spout about 5 times before sinking back down again for 10 minutes (she didn’t show her flukes when she dove, so we stuck around thinking she’d surface again — and she did). We were kind of excited to get in the water, so after watching her surface twice more, we left her…On Friday’s Whales and Cocktails at Sunset, we watched 3 cycles of a lone Humpback spouting several times before diving — and later in the cruise we found ourselves surrounded by Manta Rays. At one point, our naturalist Greg counted 6 rays feeding on the surface, but he estimated there were about 20 in the group. By the way, the collective term for a group of rays is either a “fever”, a “school” or a “herd” — there doesn’t seem to be much agreement on the term, so we’ll throw out our suggestion…a “flock”.
On Saturday’s Signature Whale Watch we were watched by a lone Humpback who surfaced frequently for over an hour pretty close to the boat. We also were mobbed by a school of Spinner Dolphins who played with us on our way back to the harbor.
On Sunday’s Wake up with the Whales Cruise we watched a lone Humpback surfacing and spouting for quite awhile. Just as we turned to go back to the bay, we saw a different whale breach about a mile away, and then watched as he breached 4 more times! We then saw two more breaches, possibly from a second whale…but we weren’t close enough to know for sure. Finally, on Sunday’s Signature Whale Watch, we got some incredible views of a lone Humpback who at one point, surfaced just 10 feet from the boat!
Have a great couple of days…I’ll send the next update out midweek!
Mahalo,
Claire
Ocean Sports Whale Fact of the Day: The order of whales is called “Cetacean”. The order is divided into two sub-orders, based on what’s in the whales’ mouths. Whales with baleen are in the sub-order “Mysticete”, and whales with teeth are in the sub-order “Odonotocete”. Researchers do not agree on the number of species in each sub-order, but the Society for Marine Mammalogy lists 14 species of Baleen Whales, and 75 species of Toothed Whales.