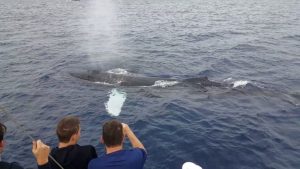 Aloha,
Guests on Tuesday’s Wake up with the Whales Cruise saw more than a dozen Humpbacks. The whales were all pretty calm…just surfacing, spouting, and sounding. On several occasions, we got great fluke views, and twice we were surprised by Humpbacks surfacing pretty close by.
The calm mood continued during our Signature Whale Watch Cruise. Again we easily saw a dozen different Humpbacks cruising around. With the exception of some breaching and pec slaps miles away from us, it seemed like this was a morning devoted just to rest. We had one surprise close encounter with a Humpback who spouted just 50 feet from us, and when we deployed the hydrophone, we heard some great loud and clear vocalizations.
Mahalo,
Claire
Ocean Sports Whale Fact of the Day: Since Doctors Katy and Roger Payne and their associates first analyzed their recordings of the Humpback song in 1967, we’ve learned that not only does every singer in a population sing basically the same song, but that the song continually evolves. The Humpback song is very organized, and consists of notes, phrases, and themes (except for the Arabian Humpbacks who don’t include the themes). No one knows the true purpose for the song, but since every population of Humpbacks sings their own song, and since they mainly sing during mating season, the song may play a role in social organization.