Check out the “Lice” 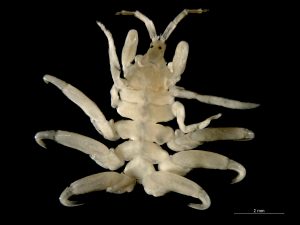 There was all sorts of interesting activity to watch during Wednesday’s Wake up with the Whales Cruise. Not only did we see 6 different breeches all about 400 yards away, but we got to watch a competitive pod of 3 charging around on the surface — and we were surprised 3 separate times when different Humpbacks surfaced right at the stern of our drifting boat.
Guests on our Signature Whale Watch saw at least 10 different Humpbacks. They all seemed to be resting…just surfacing, spouting a few times and then disappearing underwater again, but we did get a couple close encounters.
By the time our Whales & Cocktails at Sunset Cruise rolled around, the Humpbacks seemed to have woken up again. We got to spend about 30 minutes with a competitive pod of 6 whales and saw breaches, pec slaps, peduncle throws and even a huge spy hop before this group broke apart. Over the course of the cruise, we saw at least 20 different whales (and we didn’t travel far).
Mahalo,
Claire
Ocean Sports Whale Fact of the Day: Humpback Whales play host to all kinds of other animals. Besides the barnacles we often see on the Humpbacks’ flukes and other skin surfaces, the whales can also carry tape worms, lung worms, sinus flukes, and whale lice (which are related to skeleton shrimp — see the photo above) among others. Not all of these parasites actually harm the whale (which means that technically, they can’t really all be considered “parasites”). In fact, the barnacles might actually benefit the male Humpbacks who appear to use the sharp edges of the shells (perhaps inadvertently) as weapons during competitive battles.