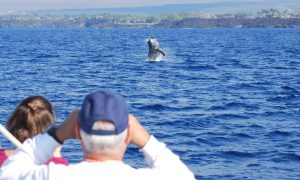 Aloha,
Hope your first weekend of 2018 was as fun and interesting as ours!
Guests on Friday’s Signature Whale Watch got to see several pods of 2 Humpbacks spouting and diving. One of these pods surprised us by surfacing so close to the boat that we really couldn’t maneuver even though we knew they were swimming away from us. On Friday’s Whales & Cocktails at Sunset Cruise we saw spouts all over the place. At one point a pod of three whales caught our attention by breaching and tail lobbing several times. As we headed towards them, they sounded and then surfaced again after just 2 minutes (which was unusual) and when they surfaced they were headed right towards us. They sounded again, and then surfaced on the other side of us about 150 yards away — so we’re pretty sure this pod actually swam under us.
On Saturday’s Wake up with the Whales Cruise we again saw lots of spouts and flukes from whales in every direction. When we deployed the hydrophone we heard lots of singing too. The wind came up strong during our Snorkel and Whale Watch Adventure Cruise, so though we saw lots of spouts, and even a whale breaching repetitively several miles away, we really couldn’t get out to get a closer look. But up in Kawaihae, the wind wasn’t blowing quite as strong. On our Signature Whale Watch, we got to spend most of the cruise with a competitive pod of 5 whales. We saw them rolling around a lot on the surface and even got to see a couple of pec slaps and a peduncle throw. It seemed like the whales had all disappeared for the first half of our Whales and Cocktails at Sunset Cruise, but then we were completely surprised when a pod of two surfaced about 20 feet from us. The back lighting from the Kohala Coast sunset created rainbows within their spouts.
Finally on Sunday’s Wake up with the Whales Cruise, we spent considerable time watching a sub-adult rolling around on the surface. Several times we saw one half of his flukes, part of his pec fin, and even a peduncle lift — we have no idea why he was acting this way, since he was all alone. And even when we left him to watch other pods, he kept swimming around us — we know because he sounded frequently and his flukes were all white making him very identifiable. Throughout the course of the cruise, we actually saw too many humpbacks to keep count. Though we saw a breach or two in the distance, our close-by whales were mostly surfacing, showing their dorsal fins, spouting several times, and either sounding or just kind of sinking underwater.
Mahalo,
Claire
Ocean Sports Whale Fact of the Day: If you were a researcher wondering whether ancient whales migrated along the same routes (or any routes for that matter) as our modern whales do, how would you go about answering the question? A PhD candidate at the University of California, Berkeley has a novel solution. He’s studying the fossilized shells of barnacles that had lived on these ancient whales. He found that you can actually look at the composition of the oxygen isotopes in the different layers of a barnacle’s shell and extrapolate where the whale was swimming and the temperature of the water the whale was swimming through when each particular layer of shell was laid down. Based on his findings, we know that whales have been living the migratory lifestyle for millions of years! Fascinating. You can read more about this research here.