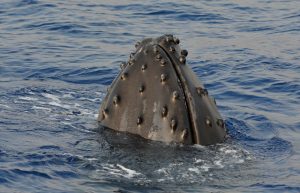 Guests on both Friday’s Wake up with the Whales Cruise and Signature Whale Watch started out their cruises with breaching Humpbacks. When we start out that good, we sometimes worry that the rest of the cruise will be a let down — but both trips just got better. On both cruises we had close encounters (on the Signature Whale Watch, the first time it was with a sub-adult who surfaced 5 different times within about 20 yards of us). Guests on both cruises also saw spouts, flukes, and dorsal fins from too many whales to count.
On Saturday’s Wake up with the Whales Cruise, we got kind of a false start. Just as we were headed out, we all received what turned out to be an erroneous text message alerting us to an incoming missile, so of course we took everyone back to shore. In the time it took us to do that, the error was revealed…and most of our guests chose to join us for a very celebratory cruise. We got to hear some great whale songs during the cruise, saw a lot of surface activity fairly far from us, and also got to watch a very big whale accompanied by a much smaller whale spouting at the surface close-by (if the small whale was a calf, he certainly wasn’t a newborn). We began our Signature Whale Watch Cruise watching a whale peduncle throwing and then tail lobbing and pec slapping for a good 5 minutes. We also saw multiple breaches from other whales…and even more pec slaps and tail lobs from whales further away.
The crazy surface activity continued during our Sunday Wake up with the Whales Cruise — there were whales surfacing, spouting and sounding everywhere. Highlights included watching one whale spout at our bow, swim right alongside our starboard hull, and then spout at the stern. This whale was close enough that we could count his tubercles! We also saw multiple tail lobs and peduncle throws from another whale as we were ending our cruise. Interestingly, though the surf was up, there were a lot of whales very close to shore (some were so close to the breaking waves that we couldn’t get over to them — it wasn’t safe for the boat).
Mahalo,
Claire
Ocean Sports Whale Fact of the Day: All mammals have hair. Humpback Whales are mammals… so where is their hair? Humpbacks have rows of bumps on their chins (see the photo above) that we call “tubercles”. Out of each one, sticks a hair that’s about 1/2 inch long that we call a “vibrissa”. Because there’s a nerve ending underneath each hair, and blood flow to the nerve, we know the whales use these hairs to sense something…but we’re not sure what they’re sensing. Quite likely, they use their hairs like cats use their whiskers- for proprioception.