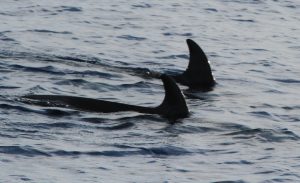 Lots to report from our weekend of Whale Watching, so I’ll get right to it.
On Friday’s Wake up with the Whales Cruise, not only did we see whales in every direction, but most of us got to see 3 breaches. And, we were visited by a rare pair of Bottlenose Dolphin (well…rare for us). On Friday’s Signature Whale Watch we were visited 3 separate times by whales who surfaced right beside the boat. Each time the whales had already been underwater for more than 20 minutes, so each time we were completely surprised. At the end of this cruise we were escorted for awhile by a pod of very active Spinner Dolphins.
We ran both of our Saturday morning Whale Watch Cruises on Seasmoke from Anaeh’omalu Bay. There didn’t seem to be a single moment during our Wake up with the Whales Cruise when we weren’t looking at a spout somewhere. So many whales…and all of them were just spouting and sounding, until the very end of the cruise when we got to see two breaches just a couple hundred yards away. It didn’t take us too long to de-board the first trip, and re-board the second trip, so we kind of figured we’d see the same kinds of activities during our 10:00 Cruise. Boy, were we wrong! During this trip, we saw pretty much every behavior in the book, including watching a whale who was just about 30 yards from our boat (we had stopped) breach 20 different times. While that was going on, there was another pod of 3 kind of behind him, and they were breaching, pec slapping, tail lobbing, and rolling all around each other. Our naturalist Greg was running out of behaviors to describe (since we were seeing everything), and mentioned that the only thing we hadn’t yet seen was a spy hop. Lo and behold, a couple of minutes later, we watched a Humpback spy hop 5 different times. And on the way back to the bay, we saw more breaches including a pod of two who breached simultaneously. On the Whales & Cocktails at Sunset Cruise, we found two Mom/Baby pods — the second pod was accompanied by an escort. We also watched a lone whale tail lobbing non-stop for 4 minutes.
We spent most of Sunday’s Wake up with the Whales Cruise with a pod of 3 smaller whales who were engaging in kind of a play-fight. We saw some incredible peduncle throws from them, and heard a bit of trumpeting, but they eventually settled down. When they next surfaced, our naturalist Greg encouraged all of us to make some noise to see if it would peak their interest…and much to Greg’s surprise, it worked! One of the three came within 50 yards of us and spy-hopped several times, before rolling over onto his (her??) back and laying at the surface right next to us with extended pectoral flippers for about a minute. And then this whale rolled back over again, spouted a couple of times, and the three of them swam off to sea together
Mahalo,
Claire
Ocean Sports Whale Fact of the Day: An adult Humpback’s bladder can hold 5 gallons of liquid.