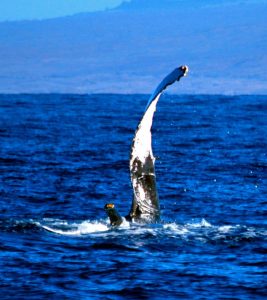 Aloha,
Thursday’s Wake up with the Whales Cruise was really fun. We had barely left the bay when we got to see two breaches and a peduncle throw from one whale in a pod of two. And…the action never really stopped for the entire trip. We saw lots and lots of spouts and flukes…but also tail lobs, and pectoral slaps. For much of the trip, we were watching a pod of two sub-adults. We couldn’t really tell what was going on between them, but they were rolling around each other on the surface and right below the surface quite a bit. When we deployed our hydrophone, the singing was loud and clear.
We began our Signature Whale Watch heading out to sea, searching for a few breachers our guests had spotted way off shore. After arriving in the area and not finding the whales, we decided to go back towards shore. We found two different pods of two Humpbacks spouting at the surface near Puako, followed by another pod of two who spouted a bit further north. After watching all these whales for awhile we saw some splashing nearer the harbor which turned out to be from a couple more whales, but before we could get to them, we found ourselves surrounded by Spinner Dolphins. The Spinners seemed to enjoy escorting our boat, riding the wakes, leaping, somersaulting, and generally doing what Spinners do. Just before we arrived at the harbor, one of those “splashing” Humpbacks surfaced again and spent some time slapping the water with his huge pectoral flipper.
Finally, guests on our Whales and Cocktails at Sunset Cruise saw more than a dozen whales, including some breachers on the horizon and a few tail lobbers and pec slappers closer by. The highlight of the cruise was watching a Humpback surface just 25 yards away…though this whale slid back underwater, he apparently decided we were interesting, because he hung around underneath us for quite awhile!
Mahalo and have a great weekend. I’ll send out a recap of our sightings on Monday.
Claire
Ocean Sports Whale Fact of the Day: When we see a Humpback wave his pectoral flipper, it looks really floppy — as if there were no bones inside it at all. But if you were to x-ray that flipper, surprisingly, you’d find all the same bones and joints that we have in our arms — all the way down to the smallest digits of our fingers. According to researcher Spencer Wilkie Tinker, Humpbacks are missing what would be the third finger on a human.