Spinner Dolphins and Humpbacks Check out the Boat 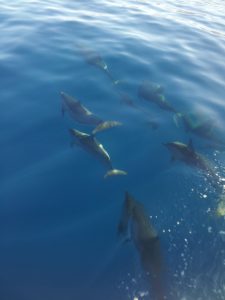 Aloha,
We began 2018 surrounded by Spinner Dolphins on our Signature Whale Watch. I’m not exactly sure who was having more fun…these little guys riding our bow wake, or all of us getting to watch them We also got some great views of a solo Humpback who was just cruising along on the surface about 100 yards from us. He was eventually joined by another solo whale, and then much to our amazement, they both swam directly under the boat! We also saw spouts and flukes from about 8 other Humpbacks during the cruise.
On our Whales & Cocktails at Sunset Cruise, we were surprised not once, not twice, but three different times by Humpbacks. Though each time we had been watching these different whales spouting and sounding, they all managed to surprise us by sneaking up underwater and then surfacing and spouting very close to us (obviously checking us out). As these various pods dove, we got great views of their flukes. We also saw 3 breaches followed by several tail lobs from a Humpback about 1500 yards from us.
Mahalo,
Claire
Ocean Sports Whale Fact of the Day: Humpback Whales and Spinner Dolphins are actually related — they’re both classified under the scientific order “Cetacean” (derived from the Greek word, “ketos” which translates to “Monster”).. But they’re in different sub-orders. Humpbacks are baleen whales, classified in the sub-order called “Mysticete”. Spinner Dolphins are toothed whales, classified in the sub-order “Odontocete”.
For those of you etymologists out there, “Mysticete” either translates from the Greek “mystacoceti” meaning “mustached”, which is a pretty accurate description of how the baleen in these whales’ mouths appears…or is a “mis-translation” from the Latin “Mustiketos” which means “Mouse Whale” — perhaps one of the earliest examples of a scientist (in this case, Aristotle) demonstrating he understood the concept of irony. “Odontocete” shares a common root word with “orthodontist”…and means just what it sounds like — “toothed – whale”.