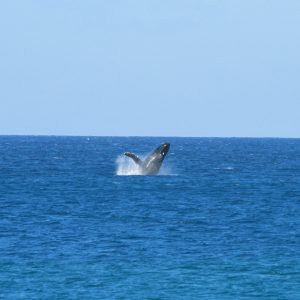 Breach!
Mahalo to Rodger Berge for sharing this photo.

The singing Humpbacks must have been very close to our boat during Monday’s Wake up with the Whales Cruise. And not only did we get to hear vocalizing whales while our hydrophone was in the water, but we also got to hear the sounds repetitive tail-lobbing makes! It definitely changed our perspective to get to listen to – as well as watch – that kind of surface activity, and it drives home how surface splashing can be a form of communication for Humpbacks. We also saw several head lunges and a breach during this cruise.
We found a young mom and her very young calf at the beginning of our Signature Whale Watch Cruise. After watching baby swimming circles around mom for awhile, we decided to leave them, and headed towards some other bigger whales down the coast. These whales sounded, but we were patient, and were eventually rewarded when two of them surfaced just off our starboard side and the third surfaced off our port side. On the way back to the harbor, we spotted mom and baby again, and this time baby was burning off some energy by breaching repetitively.
The highlight of our Whales & Cocktails at Sunset Cruise was getting to watch a pod of 2 very active adult Humpbacks breach at least 10 times. We also got to witness some peduncle throws and pec slaps from this pair. Later in the cruise we were accompanied by a pod of spinner dolphins, and when they left us, “our” pod of two surfaced again nearby.
Mahalo,
Claire
Ocean Sports Whale Fact of the Day: When we say we heard LOUD singing, just how loud do we mean? Well, Humpback whales have been recorded producing sounds at around 185 decibels. Because the decibel scales use different references for sounds underwater than through the air, that’s the equivalent of about 123 decibels for us on the surface…which is as loud as the amplified music at a rock concert when you’re standing directly in front of a tower of speakers