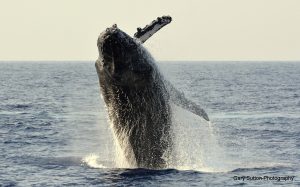 Due to a number of scheduled Exclusive Cruises, we only ran one dedicated Whale Watch Cruise on Wednesday — our Wake up with the Whales Cruise. Guests on this trip were treated to quite the explosive adventure
We started out watching a pod of two mature Humpbacks spouting and sounding — one had very white flukes, and the other very dark flukes, so we called them “Salt” and “Pepper”. After watching them sound, we were just about to say “Aloha”, and head off to find other whales, when they surprised us with a double breach just about 100 yards from us. And then they did it again, and again…and then one of them (we’re not sure if it was Salt or Pepper) did a single breach. After that, about 200 yards from us, another whale breached probably in response. Meanwhile, on the other side of the boat a different pod of two surfaced, spouted, and sounded…and then Salt and Pepper each decided to breach a total of 4 more times! And all of this occurred within 200 yards of us. Unbelievable.
Mahalo,
Claire
Ocean Sports Whale Fact of the Day: For years, we’ve been telling our guests that researchers estimated a Humpback’s  fish consumption during the summer season to be somewhere around 2000 pounds per day. And if you do a quick Google search you’ll find that “fact” cited all over the place. Turns out that this may be just another example of how inaccurate information gets spread. Once a “fact” is listed in a book, it’s picked up on the internet and its spread can be exponential. According to researcher Briana H. Witteveen and her colleagues who conducted a study to determine the effect of Humpback predation on fish abundance near Kodiak Alaska, based on the documented stomach contents of Humpbacks “processed” through whaling stations back in 1937, combined with estimates of actual suitable prey availability, an average size Humpback whale is eating more on the order of 800 pounds (or about 576,000 calories) of food each day. Does that seem like a lot of food to you?