Complete Turn-Around from Morning to Afternoon 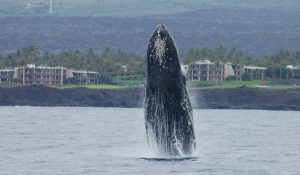 For a day in February, Tuesday started off a bit oddly for us. On our Wake up with the Whales Cruise, we saw spouts here and there but never got close enough to any of the whales to really see them. So, we called it a “Fluke” and invited everyone on board to join us again for FREE.
Guests on our Signature Whale Watch saw a bit more. We found a pod of 3 sub-adult Humpbacks hanging out together, and as they were surfacing frequently, we paralleled for quite awhile . It was fun watching them sound too, because they all lifted their flukes (one of them exceptionally high) before diving. We also saw several breaches and even a peduncle throw a bit further away from other whales.
But on our Sail with the Whales Cruise…Wow…what a Cruise that turned out to be! In the beginning of the trip we found a pod of two Humpbacks who were tail-lobbing repetitively. As we got closer, they continued the competition, head-lunging, peduncle throwing, half breaching and full breaching (we saw at least 15 breaches from those two). After about 15 minutes of continuous surface action, we had to leave them (it was very windy, and Captain Maika wanted to keep the boat heading in the right direction for a comfortable ride). But that set the tone for the rest of the cruise. It seemed like in every direction we could look, we could see a different whale breaching somewhere. And towards the end of the cruise, guests lucky enough to be looking at our 7:00 got to witness a simultaneous breach from two BIG whales just about 15 yards away.
Mahalo,
Claire
Ocean Sports Whale Fact of the Day: One of the questions we get asked most frequently on whale watch cruises, is “Is there a time of day when the whales are most active”? On Tuesday, the answer was “between 3:00 PM and 5:00 PM”…but seriously, there doesn’t seem to be any recognizable diurnal surface behavior pattern for Humpbacks — if there were, we’d only run Whale Watch Cruises during those times! We (and actual researchers) have noticed though, that when it goes from calm to windy (which did happen yesterday), the whales seem to “wake up”.