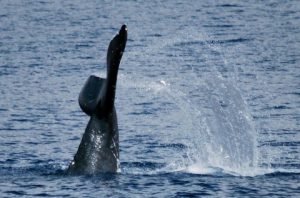 As usual, there’s so much to report from a weekend of Whale Watching, so here are just a few highlights.
Mahalo,
Claire
Ocean Sports Whale Fact of the Day: Though they look inflexible, a Humpback’s flukes (the wide part of his tail) contain no bones…just cartilage. When the whale is born, the sides of his flukes are curled up so he can slide more easily out of mom’s birth canal.