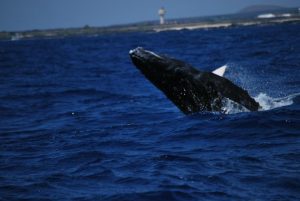 We had a lot of fun on our Monday Cruises. Guests on our Wake up with the Whales Cruise got to see Mom with her very, very young calf. Baby’s skin was quite light, and his dorsal fin was completely bent over so we knew he had been born very recently. We also got to see something that’s really rare in Hawaiian waters. We spent more than 30 minutes watching two whales basically herding a school of small fish. The school would explode at the surface, and then the whales would pop up, and they’d all submerge again. Finally, a big mahi mahi jumped up into the air right in the middle of it all. Though we aren’t completely positive, we’re pretty sure those Humpbacks were taking the opportunity to have a little snack.
Guests on our Signature Whale Watch Cruise saw more than a dozen whales, including a pod of two who very unexpectedly breached about 50 yards off our starboard side. We also watched some repetitive breaching further away, and saw some pectoral slapping. When we deployed the hydrophone, the songs were so loud we knew that the singers were less than a mile away.
It was still too murky from our weekend of huge surf  to snorkel during our Snorkel Cruise, but we invited our guests to join us on an extended Whale Watch Lunch Cruise, and we got to see lots of interesting Humpback behaviors. We started out watching Mom and her baby (who eventually decided it would be a good idea to come over to the boat and take a closer look). We had already seen Mom breach twice, before we arrived on the scene so we felt like we knew her well. Of course those weren’t the only whales we saw during the cruise — there were several other spouters and sounders around us, and we also got a surprise breach from a Humpback who was only about 30 yards off our starboard side.
Mahalo,
Claire
Ocean Sports Whale Fact of the Day: Why was watching Humpbacks engaging in what we think was feeding behavior so interesting to us? Well, for the most part, we know that Humpbacks in every ocean of the world fast during mating season. And how do we know this? During whaling days, the whalers flensing the whales aboard their boats (cutting them apart) would find the whales had empty stomachs while they were in the tropics. Also, the Humpbacks main food sources are scarce in the lower latitudes where they mate. But to really figure out why we know Humpbacks don’t feed frequently in Hawaiian waters, we invite you to “think like a scientist”. This year 15,000+ Humpbacks will filter through the islands. If even a small portion of them were consuming fish on a regular basis…well…what goes in….(you finish that thought, please). And we don’t see that kind of evidence in the water here!