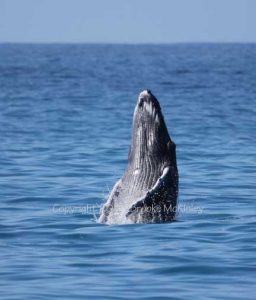 Guests on Wednesday’s Wake up with the Whales Cruise saw at least a dozen whales. Most of them were in pods of two, and many of them were spending significant amounts of time on the surface between dives, so we we got some great views of them. And though it was probably just a matter of luck, most of us were looking in the right direction when two whales breached only about 300 yards from us. When we had a window of time to deploy the hydrophone during this cruise, we got to hear some very interesting sounds.
On our Signature Whale Watch Cruise we saw spouts minutes after leaving the harbor. At first it seemed like the whales were all playing with us because every time we got within a couple hundred yards of them, they’d sound. But Captain Kino was patient, and eventually a pod of two surfaced only about 30 yards away. After they sounded, we waited around for about 25 minutes (we were entertained though — we were listening to all the singing going on underwater through our hydrophone), they both surfaced 30 yards from us again! After that second close encounter, we headed south, and found Baby, Mom, and Escort. While we watched, baby breached a couple of times, and spent some time being pushed around on the surface on top of Mom’s rostrum (head). Meanwhile Mom looked like she was trying to get away from the Escort, and the Escort, between active pursuits of Mom, spent some time lying on his side with his pectoral fin and half his fluke in the air, belly towards us. It was a lot of fun to watch.
We found a Mom/Baby pod in the beginning of our Whales & Cocktails at Sunset Cruise and watched baby play around a bit at the surface. He breached, and kind of half breached for awhile before tiring himself out. Later in the cruise, we got a close encounter with a lone Humpback who surfaced to take a look at us. And then, as the sun was setting, we caught up with Mom and Baby again. Baby breached over and over in the sunset, and Mom breached once too.
Mahalo,
Claire
Ocean Sports Whale Fact of the Day:  Researchers have observed that female Humpbacks with calves are accompanied by a male escort about 83% of the time during the winter season in Hawaii. Since nursing moms rarely get pregnant, we’re not sure why these males are hanging around…one theory is that the escort is trying to make a good impression on the female so that when she is receptive, she’ll consider the possibility of mating with him. Other researchers theorize that she puts up with the company of one male, hoping that he’ll scare off other amorous suitors (maybe dealing with one male at a time is better than having to deal with 2, 3, 4 or more).