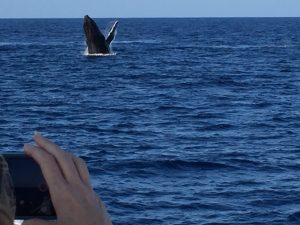 We weren’t very far from the harbor when we saw our first pod of two Humpbacks on our Signature Whale Watch. After they sounded, we didn’t move the boat (though we could see a couple other pods of two spouting in other directions). Patience paid off for us, when our first pod surfaced again and spouted close-by. Later in the cruise, we spent time watching a young calf swimming around her Mom and an Escort. We also saw a breach about 800 yards from us, and a double breach on the horizon. Besides Mom, calf, and escort, all the other whales we saw during this cruise were in pods of two.
Guests on our Whales and Cocktails at Sunset Cruise were the object of attention for a pod of two whales who surfaced near our idling boat at the beginning of our cruise. Later, we encountered a different pod of two who each breached right next to us (or maybe it was the same whale who breached twice). Anyway, after waiting around for awhile to see if they’d breach again, one of them surprised all of us when he surfaced and spouted 20 feet (you read that right — feet, not yards) from the bow. And just as the sun was setting, we found a small competitive pod. We watched lots of twisting dives and got to see a few head lunges from this group as they fought for dominance. It was so fun watching all the action that we ended up coming in a bit late to the dock — but no one seemed to mind.
Mahalo,
Claire
Ocean Sports Whale Fact of the Day: There’s a time when a whale is still in its fetal stage when she’s covered in fur. By the time the calf is born, the fur has disappeared. Many researchers believe that this is another indication that whales have evolved from an animal with a common ancestor to a hippo. The idea that the stages of an animal’s fetal development reflect evolutionary development or “Ontogeny recapitulates Phylogeny” was first proposed by Ernst Haeckel around 1900.