The Chase is On! 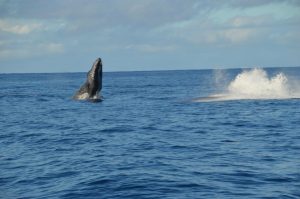 The Chase is On.
Photo courtesy of Susan Bagley

We operated just one cruise on Thursday — our Wake up with the Whales Cruise — but the quantity and quality of whale sightings on this trip more than made up for the day’s lack of cruises.
After leaving the bay, it actually took us a little while before we saw any action, but we eventually saw 3 breaches from what turned out to be 2 whales towards our north. When we caught up to them, they appeared to be in some sort of a competition, as one was chasing the other pretty quickly at the surface. Of course we couldn’t be sure of the genders, but we guessed that the whale in the lead may have been female, and the other a male trying to mate with her — or it could have been two males attempting to assert dominance over each other. We heard some trumpeting (whales “out of breath”) from this duo, and though we tried to keep a parallel course, they eventually turned towards us. At this point, we saw another pod of three off our bow, headed towards our pod of two, and once the pods combined (in a frenzied mob), they all made a beeline towards the boat before heading off to sea. We saw a few more breaches in the distance too. Throughout the course of our 2 hour trip, we saw spouts and flukes from about 20 different Humpbacks.
Have a great weekend — I’ll send out our next report on Monday!
Mahalo,
Claire
Ocean Sports Whale Fact of the Day: When we watch a surface-active competitive pod of whales, we assume it is comprised of one female either leading or being chased by a group of males. It often appears that every male is competing with every other male for access to the female. Recently researchers have observed that male humpbacks may form coalitions, working together to corral the female so that one may have easier access to her.