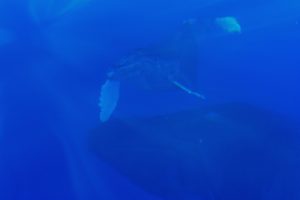 Mugged by an inquisitive calf (and Mom)!

We started our weekend with Momma Humpback and her baby swimming right under our boat during Friday’s Wake up with the Whales Cruise. Later in the trip, we had a close encounter with a couple of curious adult Humpbacks — but not as close as that Momma and calf were!
Guess what happened on Friday’s Snorkel and Whale Watch Adventure Cruise? We’ll let the whales speak for themselves…
On Friday’s Private Snorkel Cruise we got to see two different Mom/Baby pods. The first pod came up right up to the boat (maybe 20 yards away), and we also got to see baby breach 3 times. The second pod was accompanied by a big escort.
On Saturday’s Wake up with the Whales Cruise, we came across a pod of two mature Humpbacks. We started shouting, encouraging them to come see us, and lo and behold, it worked! These two spent some quality time investigating us, swimming all around and under the boat, as we all ran from side to side, and bow to stern to watch them (well, we didn’t “run”, but you get the idea). They were with us so long that we ended up coming back to the bay a little late (we can’t engage the engines with whales that close)!
Saturday’s Signature Whale Watch began with a very active pod of Spinner Dolphins who played around the boat for a good 10 minutes. Later, we found a Mom/Baby pod. As we shouted encouragement, baby did a 180 on the surface and came right towards the boat, breaching when he got 20 feet from us. After that, we cruised south and found another Mom/Baby pod. This time, they were accompanied by an escort, and this time Mom kept her calf away from us.
There was a point during Sunday’s Wake up with the Whales Cruise when a pod of 2 mature Humpbacks were spouting on the surface about 120 yards from us at our 10:00, and another pod of 3 (Mom, Baby and Escort) were on the surface about the same distance from us at our 2:00, giving us that all time favorite dilemma of “which way do we look?!”. Those of us who chose to watch Mom, Baby and Escort got to see Baby breach twice!
Guests on Sunday’s Signature Whale Watch were greeted by a pod of Spinner Dolphins shortly after leaving the harbor. These dolphins weren’t all that active, but a whole bunch of them spent some time riding our bow wake. We also got to watch a competitive pod of 3 mature whales charging around on the surface. We could see a jaw clap/throat inflation from whale #2, and one of them (we think it was whale #1) rolled onto her back and did some double pec slapping for awhile.
Ocean Sports Whale Fact of the Day: The Nootka (also known as Nuu-chah-nulth) who lived in the Pacific Northwest were great whale hunters, but one member of their tribe held the role of “Whale Ritualist” whose job it was to call the carcasses of dead whales floating at sea to drift onto shore.