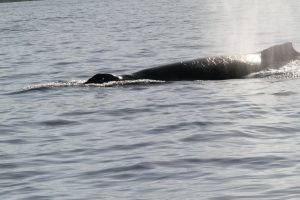 Monday’s Wake up with the Whale Cruise just kept getting better and better. At first, our sightings were of pods of two Humpbacks surfacing and spouting several hundred yards away. But as the cruise continued, we kept seeing whales closer and closer to the boat until at the end of the charter, a young adult (about 35 feet long) surfaced right next to the boat. Oh…and we got a chance to deploy the hydrophone, and got to hear some “epic” sounds.
Guests on our Signature Whale Watch Cruise saw several spouts from adult Humpbacks here and there, but spent most of the cruise with two different pods of Mom/Baby. The second pod surprised us completely because when we saw mom surface, we also got to see that she was accompanied by an escort. Our second calf was also busily burning off energy…we got to see him breach way up into the air 3 separate times just about 75 yards away from us.
A pod of Spinner Dolphins found us during our Whales & Cocktails at Sunset Cruise. They were further out to sea than we usually see them, so we’re thinking they were thinking about getting a head start to their nighttime feeding grounds in the deeper water. They stayed with us for awhile, riding the wakes, and leaping and spinning. Later in the cruise we watched as 2 pods of two whales each spouted simultaneously and sounded simultaneously — one pod was at our 3:00 and the other at our 9:00 — it was so well synchronized, it was as if they had an appointment to meet somewhere below us!
Mahalo,
Claire
Ocean Sports Whale Fact of the Day:  A Humpback Whale doesn’t reach sexual maturity till it’s about 35 feet long (age 5 or 6 for females, and a little bit later for males). Researchers have observed that most Humpbacks in the North Pacific don’t begin calving successfully till they’re at least 10 years old – the mean average is 11.8 years. In the North Atlantic, Humpbacks generally give birth for the first time between ages 5 and 7, reaching sexual maturity earlier too.