Boys and Girls…What a Whale Watch! 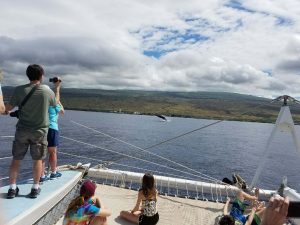 With just a few days left of our Whale Watch Season, we’re happy to report that our Monday started out fantastically. Guests on our Wake up with the Whales Cruise got to see a solo young whale — not a calf — but definitely a smaller whale. We had to motor all the way up to the area offshore of the Mauna Kea Beach Hotel before finding this little guy (and I use the word “little” –but the whale was at least 25 feet long…maybe longer…). We watched this whale spout 3 times before he sounded. The first time, he was under water about 10 minutes before surfacing and doing that 3-spout thing again. 10 minutes after he sounded that second time, we were expecting his return…but it took an additional 5 minutes before we saw him again. After spouting 3 more times he sounded yet again and we had to leave him to get back to the bay.
Guests on our Signature Whale Watch got quite the show! We found that same whale (we think), but this time, he was really, really active. How active? Take a look at the photo above! We saw multiple breaches and partial breaches and head lunges. Since the whale was by himself (at least the entire time we watched him, we didn’t see signs of other Humpbacks anywhere), we have no idea why he was so active. If the researchers who suggest Humpback surface activity is for purposes of communication, who was he communicating with? Us? Was he irritated by something in the water and wanted to “scratch an itch”? Was he playing just because he could? Sadly, we’ll never know the answer to these questions…but we sure enjoyed our time with him!
Mahalo,
Claire
Ocean Sports Whale Fact of the Day: Throughout the season, I’ve been using the pronouns “him” and “her” almost randomly in these blog posts when referring to Humpbacks. And that’s because unless there’s a calf around, it’s pretty much impossible to identify the gender of a Humpback from our vantage point. If there is a calf, the whale closest to the baby is usually “Mom”, and any other whales joining the pod are males.
So how do researchers figure it out? If you’re underneath the whale…or if the whale rolls over close to your boat and you know exactly what you’re looking for, you may be able to distinguish between the genders. A female Humpback’s genital slit is almost adjacent to her anus, separated only by a small lump called a “Hemispherical Lobe”. She also has two visible mammary grooves located on either side of her genital opening. A male Humpback’s genital slit, on the other hand, is about midway between his umbilicus and anus (so, they’re much further apart than a female’s), and he lacks that “hemispherical lobe”.