Humpback and Spinner Dolphins at Sunset 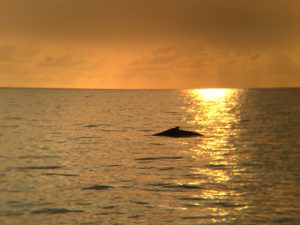 Humpback at Sunset
Image courtesy of our own Greg Neilson

We were just outside of the harbor on Monday’s Whales and Cocktails at Sunset Cruise when our eagle-eyed Captain Kino spotted a lone Humpback to our north, so we headed that way. This whale was doing some pretty short dives, so we got to watch him surface, spout about 3 times. and sound really frequently. We paralleled him for quite awhile until Captain Kino saw those tell-tale splashes from a pod of Spinner Dolphins.
So, we headed out to see them. Just as it was almost dinner time for us, it was almost dinner time for them too, and they seemed to be very excited about the prospect of heading out to sea to dine on some delicious squid and lantern fish. They were leaping and spinning all around us, playing in our wakes and playing with each other.
We finally left them and went back to visit our lone whale. We watched him until it was time to turn back towards the harbor, but the show wasn’t over…we got to see a beautiful and bright rainbow followed by an incredible double rainbow on our way back to the dock.
Mahalo,
Claire
Ocean Sports Whale Fact of the Day:  Humpbacks can maintain a consistent body temperature even when swimming in cold Alaskan waters. How do they do that? Besides their protective layer of blubber, they actually have something called a “counter current” circulatory system. Some arteries in their flippers, flukes, and dorsal fin are surrounded by veins, allowing some heat from the blood traveling through the arteries to be transferred to the venous blood returning to their hearts, instead of being lost to the environment.