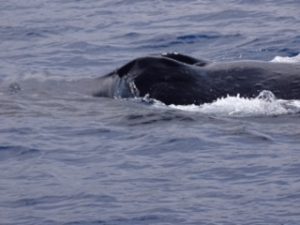 Humpback Cruises by the Boat
Image Courtesy of Marty Kurpershoek

We didn’t run dedicated Whale Watch Cruises on Thursday due to some previously scheduled exclusive charters, but we did get a chance to spend a few moments with a Humpback.
Guests on Alala’s Private Snorkel Cruise got some quality snorkel time in before heading out to watch whales. While we were at our snorkel site, we got a call that there was a Mom/ calf pod up near the mouth of the harbor, so, we “beat feet” up north, only to find that it wasn’t a pod of two — it appeared to be a lone whale, and it wasn’t a calf — but it certainly was a smaller whale.
We watched this juvenile surface, spout, and sound through a couple of dive cycles. He was underwater for a fairly short amount of time during each cycle, but eventually (and unfortunately) we had to head back to the dock before we could determine if he was accompanied by any other of his whale friends.
Have a great weekend! I’ll send out a recap of our sightings on Monday.
Mahalo,
Claire
Ocean Sports Whale Fact of the Day:  We now know that not every Humpback who survives the summer season in Alaska will choose to migrate back next winter. Based on information compiled by our favorite researcher Chris Gabriele and her cohorts for the National Park Service in Glacier Bay and Icy Strait, at least 10 Humpbacks have been documented spending one winter off the coast of Sitka, and at least one off the coast of Juneau. We really don’t know how common this behavior is because almost no photographic identification research takes place in SE Alaska over the winter (and really, who can blame the researchers when there are such great opportunities to conduct their studies in sunny Hawaii during this time period?!).