Too many to Count 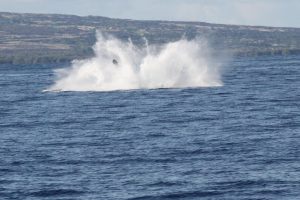 We were back to “business as usual” on Thursday. On our Wake up with the Whales Cruise, we literally lost count of the number of whales we saw. It seemed as if there were spouts and flukes in every direction for almost the entire cruise. The whales were all fairly calm — most of them were surfacing for a few breaths before sounding again but we did see lots of pectoral slaps from one whale, several breaches between 400 yards and a couple of miles away, and some tail lobbing. When we deployed the hydrophone, we realized that there was a lot going on underwater too — the sounds we heard were very loud, and very clear.
About 20 minutes after we finished de-boarding this first cruise, we went right back out again on an Educational Keiki Whale Watch with some students  and their teachers from The Learning Center. We always have a good time when there are keiki aboard, and this cruise was no exception. We found a Mom/Baby/Escort pod almost immediately after leaving the bay. It made us wonder where that pod had been hiding during our previous cruise, because though we were in the exact same part of the ocean just 30 minutes prior, we sure didn’t see that calf.
We watched baby try to approach us a number of times, but Mom wasn’t having it, and she did a good job keeping him away. The escort seemed to be annoying her — she kept changing directions to swim away from him (pushing the baby in front of her). And when a second escort joined our trio, it really got exciting! The two males shoved each other around a bit, and the primary escort even blew some bubbles at this intruder… finally, Mom did a huge peduncle throw. We’re not sure if those males got the message, because they all took sounding dives, and unfortunately we had to leave them to return to the bay.
Have a great weekend. I’ll send out a recap our sightings on Monday.
Mahalo,
Claire
Ocean Sports Whale Fact of the Day: Researchers off the coast of Brazil have discovered that some marine mammals including Humpbacks may have up to 14 spleens. Among other functions, the spleen stores red blood cells (which store oxygen)…so an extra spleen may help a deep diving animal stay underwater longer. These spleens contract during a dive, releasing fresh blood with oxygenated red blood cells to keep the whale’s important organs alive and functioning. 14 spleens?! Amazing.