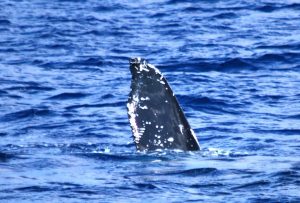 What’s this? See today’s “Fact of the Day” below for the answer!

We saw all kinds of animals on our Tuesday Wake up with the Whales Cruise, starting with a good size Manta Ray. After circling around to watch it somersault through the water for awhile, we could hardly believe our eyes as we were then met with a pod of Spinner Dolphins. We let them play with the boat for awhile too before heading out to see a spouting Humpback. This whale disappeared from sight when we were about 250 yards away, and though we waited around for awhile, we never saw him again. But the show wasn’t over, as a different whale breached just about 400 yards from us — she was a big whale, and she got completely out of the water during her breach, so watching her, looked like some kind of slow motion movie effect. Later in the trip, we saw 2 other Humpbacks who were breaching repetitively about 1000 yards away. And then, to top it all off, we saw a 6 1/2 foot shark cruising around on the surface. We couldn’t get close enough to ascertain his species…but anytime we see a shark, it’s really exciting.
After this cruise, we headed out again with some keiki and their teachers from Harmony Education on an Educational Whale Watch. Cruise. After we found our first whale and watched it sound, we deployed the hydrophone, and take a listen to what we heard! These sounds were so unusual and LOUD, that we stayed and listened for quite a while. As we listened, a whale surfaced, spouted and sounded about 75 yards from us, and then again about 100 yards away.
Meanwhile, up in Kawaihae, guests on our Signature Whale Watch Cruise got to spend time with Mom Humpback and her little calf. The calf was showing interest in us, and Mom was fairly permissive so we got some great views of this little family. We were also approached by a pod of two adult Humpbacks, and saw another whale breach a few times further away from us.
Mahalo,
Claire
Ocean Sports Whale Fact of the Day: Do you know the easiest way to distinguish whether that big creature swimming rapidly towards you is a whale or a shark? Watch the way it swims…whales propel themselves through the water by moving their tails up and down vertically. Sharks and other fish move their tails from side to side. Aristotle was the first person to document this difference around 350 B.C. – hopefully you’ll never need to use this information for anything other than winning a trivia contest!
FYI, the photo above is not of a shark fin — it’s actually 1/2 of a whale’s fluke, but we call this behavior “finning” for pretty obvious reasons.