A Bit of Competition between Humpbacks 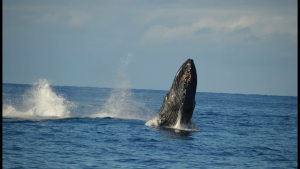 I wish you could have joined us on Wednesday’s Wake up with the Whales Cruise. We spent the first half of the cruise watching a pair of Humpbacks surfacing, spouting, and diving for 15 minutes before surfacing again. While we were waiting for the whales to come back to the surface, we deployed the hydrophone, and didn’t really hear a lot, so we finally decided to leave the area. As soon we started up the engines, the Humpbacks (who were about 100 yards in front of us) each breached! They must have been working something out between themselves, as they followed the breaching up with several forceful head lunges.
On the way to see some whales we saw to the south of the harbor at the beginning of our Mid-Morning Whale Watch Cruise, we were completely surprised when a couple of other Humpbacks surfaced at our stern. After looking at us, they slipped back under the water, and we continued on towards what we thought were spouts from a Mom and her calf near the Mauna Kea Resort. When we got closer, we realized that it was actually two adult Humpbacks we were looking at. We stuck with this pair for most of the rest of the cruise, and were rewarded when one of them spy hopped to take a look at us. In case you’re not familiar with the term, a “spy-hop” is what we call it when the whale rises slowly and vertically out of the water till his eye is above the surface. As big as Humpbacks heads are, we can be looking at 15 feet of rostrum before that eye is above water!
Mahalo
Claire
Ocean Sports Whale Fact of the Day: You probably already know that Humpback Whales don’t have teeth. But what you might not know is what they have instead: approximately 270 – 400 pairs of baleen plates hanging from the top palate of their mouths ranging in length from a foot to about 3 feet long. Where the baleen is attached to the palate, it feels like a horse’s hoof — but it fringes out to form dense mats allowing the whale to “strain the soup of the ocean” when feeding.