Humpback Swims RIGHT Around Our Boat 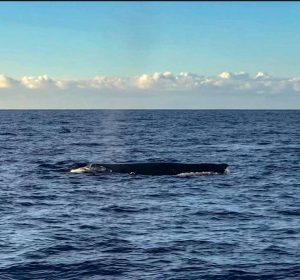 Aloha,
Guests on Thursday’s Mid-Morning Whale Watch Cruise got to see seven different Humpbacks on multiple occasions. We began our cruise watching a pod of 3 whales — though we never really saw all 3 at the surface at one time. These whales were only underwater for a couple of minutes at a time — and one of them showed his white-tipped flukes before each of his short dives.
After watching these whales for awhile, we were excited to see another pod of two whales at the surface, so we headed over to see them. One of these whales must have been excited to see us too, as he surfaced at our 4:00…and then swam right behind the boat, then up the port rail, and then did a weird little spin at the surface, then swam right under our bow trampoline, and then surfaced and spouted on our starboard side, and then started to swim down our starboard side but then spun again and headed out in front of us! Whew!
Right after all of that excitement, we saw yet another pod of two whales, and they were heading our way. Though we were waiting to see if our second pod of two would surface nearby, we finally gave up and headed towards that third pod — only to have the second pod surface behind us and spout. But as our time at sea was coming to an end, we said “Aloha” to all of our Humpback friends and headed back to the harbor.
Have a great weekend…I’ll send my next report out on Monday.
Mahalo,
Claire
Ocean Sports Whale Fact of the Day: We know Humpbacks are big animals, though it’s not until we have a CLOSE ENCOUNTER that we really appreciate how big they are. But, even as big as they appear to us, Humpbacks are only the 5th largest of the great whales — Blue whales, Finbacks, Grays, and Right Whales (including Bowheads) are all longer (on average)– and if you want to count the toothed whales in the list, male Sperm Whales are longer too.