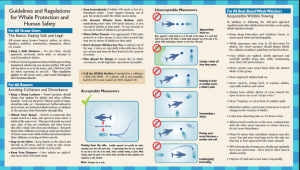 Guests on Thursday’s Wake up with the Whales Cruise were delighted to see a juvenile Humpback offshore of the Mauna Lani Resort. This smaller whale seemed to be on his way somewhere (or maybe it was “from” somewhere) as he surfaced and spouted a couple of times before sounding and swimming underwater, then surfacing, sounding, and swimming some more. He (or she?) was alone as far as we could tell…so maybe this whale’s goal was to find a friend in Kohala! We got to watch this behavior for awhile, before we had to say “Aloha” and head back to Anaeho’omalu Bay.
Mahalo and have a great weekend. I’ll send out a recap of our weekend of Whale Watching on Monday.
Claire
Ocean Sports Whale Fact of the Day: On Wednesday’s Whale Report, I promised I’d outline the rules regulating human to Humpback interaction. In 1966, the International Whaling Commission banned most nations from hunting Humpbacks. In the U.S., the Marine Mammal Protection Act of 1972, and the Endangered Species Act of 1973 provide additional protection to the whales. And though the Humpbacks are now no longer “officially endangered”, unless you’re operating under a federal research permit, approaching humpback whales within 100 yards (300 feet) by any means (boat, swimming, kayaking etc) or within 1,000 feet from aircraft is still prohibited. It’s also prohibited to approach the whales closer than 100 yards by interception (i.e. you can’t “hop-scotch” in front of them), or do anything that would disrupt their “normal behavior” or “prior activity”. Click on the photo above to see a PDF describing this protection in detail from NOAA’s Hawaiian Island Humpback Whale National Marine Sanctuary website.