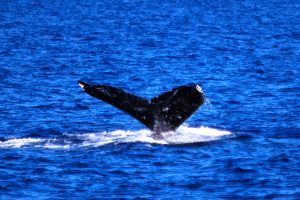 Aloha,
Guests joining us on Thursday’s Wake up with the Whales Cruise didn’t have to wait long before seeing a Humpback — we actually found a sub-adult right outside of the bay! After watching this whale spout and submerge, we went a bit further and found a pod of two larger Humpbacks. These whales were quite busy interacting, lobbing their tails and swimming alongside each other. At one point, they surfaced just about 50 yards from our idling boat. Later in the cruise we watched a different pod of two adult whales for awhile. When we lowered our hydrophone, we could hear signing, but none of those singers were close by.
Guests on the Mid-Morning Whale Watch Cruise had kind of the opposite experience. On this cruise, it took us quite awhile before seeing anything, but we finally found a whale who sounded right after we saw his spout. We got to the area where we thought he was and waited 17 minutes before he surfaced again. This time he spouted 6 or 7 times before showing us his beautiful white flukes. We waited around for awhile for him to reappear, but after about 25 minutes, we took off…after which a pod of two Humpbacks surfaced near the area we’d been in (we were quite surprised as none of us knew they were there). On the way back to the harbor, we saw a pod of dolphins — not spinners — cruising along the coastline. They never got close enough for us to determine their species, but it was fun watching them “porpoise” along the surface as they paralleled us.
Mahalo and have a wonderful weekend. I’ll send a recap of our sightings out on Monday.
Claire
Ocean Sports Whale Fact of the Day: Why are we so interested in the patterns we see on the ventral side (underside) of a Humpback’s flukes? It turns out that one of the best ways whale watchers have to identify individual Humpbacks is by these unique markings. Currently, the National Marine Mammal Laboratory based in Seattle maintains a data base containing more than 30,000 photos of the North Pacific Humpbacks flukes dating back to 1966, but lots of other researchers, including those involved in the 3 season SPLASH (Structure of Populations, Levels of Abundance and Status of Humpbacks) project have also used these patterns to identify who’s who in the whale world and estimate population levels.