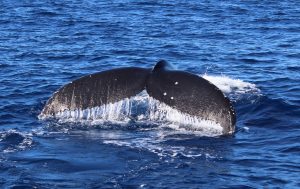 We operated a whole bunch of cruises this past weekend — here are some of the highlights:
Mahalo,
Claire
Ocean Sports Whale Fact of the Day: A fully grown Humpback Whale can hold his or her breath for around 45 minutes. Usually, that’s not what we observe in Hawaii though. We’re more likely to witness 10-20 minute breath hold dives, and if the whale is really active, s/he surfaces to breathe a lot more frequently.