A Lot of Humpback Competition 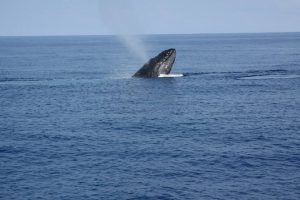 We had a fantastic time on Monday’s Wake up with the Whales Cruise. We saw some spouts out to sea in the very beginning of the cruise, but before we could get to those whales, we were surprised by a complete breach from a whale much closer to us. That breach was followed by 4 more breaches, and all of this action turned out to be from a competitive pod of 3 big adult Humpbacks. We were able to parallel these 3 as they swam north towards the Mauna Lani Resort. They were on the surface a lot…and we got to see multiple head lunges, and pec slaps (at one point one of those competitors was lying on his back at the surface, slapping alternate pectoral flippers). We also got to see peduncle throws and tail lobs before one of the three competitors gave up and swam away. The two remaining Humpbacks made a close-by pass of the boat, spouting and then sounding…one of them giving us a great view of his (her?) flukes, while the other one just kind of slipped under the water.
Mahalo,
Claire
Ocean Sports Whale Fact of the Day: When we watch a competitive pod of whales on the surface, we assume it is comprised of one female either leading or (more likely) being chased by a group of males. It often appears that every male is competing with every other male for access to the female. Recently researchers have observed that male humpbacks may form coalitions, working together to corral the female so that one may have easier access to her…though this morning, it sure didn’t look like we were getting to see any cooperative behaviors!