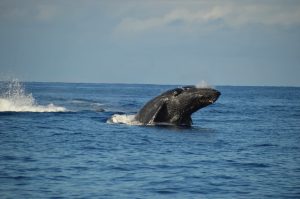 Guests on Wednesday’s Wake up with the Whales Cruise saw at least 10 different Humpbacks. We spent most of our time with a competitive pod of 4 big adult whales who stayed a little over 100 yards away from us They were chasing around on the surface, breathing hard, and lunging at each other. We also got to watch a calf breach from about 300 yards away….and to top it off, we even got to see some Spinner Dolphins.
We also saw about 10 different Humpbacks on our Mid-Morning Cruise. The ocean was still pretty choppy due to the wind, so traveling to those whales was really difficult. All of the sightings were from a distance until the very end of the cruise when we found a whale just at the entrance to the harbor. We saw him spout and dive from a way’s away, so we motored to where we thought he was and waited. Patience paid off when he surfaced and spouted 5 times about 30 yards off our 11:00 before lifting his beautiful flukes and diving once again.
By the time our Whales & Cocktails at Sunset Cruise rolled along, the ocean had calmed down quite a bit, making for a gorgeous setting for whale watching. We had barely left the harbor before we found Mom/Baby/Escort…and baby was on the surface a lot…as was his Mom. We even got a couple of glimpses of the escort lifting his huge flukes as he sounded. After watching this trio for about half an hour, we continued up the coast. Towards the end of our trip, we found a lone whale and watched him spout a couple of times before the sun set.
Claire

Ocean Sports Whale Fact of the Day:  Humpback Whales play host to all kinds of other animals. Besides the barnacles we talked about in yesterday’s Fact of the Day, the whales can also carry tape worms, lung worms, sinus flukes, and whale lice (which are related to skeleton shrimp) among others. Not all of these parasites actually harm the whale (which means that technically, they can’t really all be considered “parasites”). In fact, the barnacles might actually benefit the male Humpbacks who appear to use the sharp edges of the shells (perhaps inadvertently) as weapons during competitive battles.