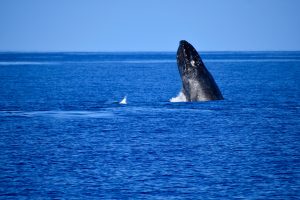 We operated both of our Monday Morning Whale Watch Cruises on Seasmoke from Anaeho’omalu Bay. Guests on the Wake up with the Whales Cruise got acquainted with a Mom/Baby pod. We’re not sure if Mom was just being permissive, or if she was interested too, but both of them surfaced fairly close to the boat. We got to see some other Humpbacks breaching in the distance, and also saw a head lunge. When we deployed the hydrophone, we all heard some loud and clear singing.
We began our Mid-Morning Whale Watch Cruise with a dilemma (actually, our favorite kind of dilemma). There were different pods of Humpbacks on three sides of the boat, so we weren’t really sure which way to go. While we were trying to decide, we got to watch a pod of 2 being joined by a third whale (always an interesting interaction), and took a moment to deploy our hydrophone. After listening to some loud singing, we headed off towards a pair of breachers. By the time we got to where they had been, they had stopped breaching, but it was okay with us, because right after that we found a Mom/Baby pod who were on the surface a lot. There was also an escort lurking around, but he spent a lot more time underwater.
Mahalo,
Claire
Ocean Sports Whale Fact of the Day: A week ago or so, we promised we’d post a “Fact of the Day” relating what we know about the role of the “Escort Whale” in Humpback society. Since we frequently see Mom and baby whale accompanied by this third whale, we think the role played by the “escort” role must be significant. We used to think the escort was a female helping mom take care of her baby, but now that we can identify gender more easily, we know it isn’t. It’s a male. Though a new mom infrequently ovulates, researchers believe that perhaps the lurking male whale is “hoping to make a good impression” so when she is receptive, he may be the first to mate with her. Unless it’s a very strange coincidence, this escort is not the father of the calf. Why would Mom allow a male who isn’t Dad to hang around? Stay tuned…we’ll discuss our best guesses in a future post.