Big Competitive Pod and a Whole Lot of Breaching 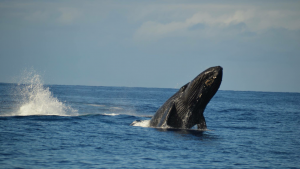 Whoa, was our Wake up with the Whales Cruise on Thursday a good time!
We found a pod of 5 Humpbacks who were definitely competing. We got to watch them the entire trip…we saw head lunges, jaw claps, and even a few spy hops. One, or two, or three, or four, or all of these whales were on the surface a lot. And when they weren’t, we only had to wait about 5 minutes (sometimes less) till they popped back up again. Towards the end of our cruise, we watched as 3 of the 5 headed in to very shallow water (like 25 or 30 feet deep) offshore of Keawa’iki (that’s the black sand beach about 2 miles south of Anaeho’omalu). We’re not sure if the shallow water tactic was a decision by the whale in the lead to discourage some of the competitors, but it seemed to work that way, as two of the group peeled off. See today’s Fact of the Day for more on this.
Our Mid-Morning Whale Watch was just as fun, but a bit more difficult to describe. We spent most of the trip watching a pair of Humpbacks…one had distinctive white pectoral flippers, and the other had distinctive markings on his flukes, so we know we were watching the same pair regardless of where we encountered them. In the beginning of the cruise, they each spouted several times quite near us before sounding. Later the whale with the white pecs surfaced on the other side of us, heading away from us, so we’re pretty sure he had swung by to check us out. And though we saw splashing and spouting a bit further away, we decided to wait to see if our pair decided to surface again near us. And boy, did they ever…we got to see them breach 18 times (yep, you read that right, 18 breaches) all about 75 yards from us. After that excitement, we cruised around looking for other whales, only to encounter our white pec friend and his buddy one more time.
Have a great weekend. I’ll send out our next report on Monday.
Mahalo,
Claire
Ocean Sports Whale Fact of the Day:  Though we didn’t see a calf swimming with Thursday’s competitive pod, Dr. Alison Craig and her associates observed that female Humpbacks in Hawaii with calves in tow swim 75% faster when they’re being chased by males in deep water than when they’re being chased in shallow water. As water depth decreased so did the number of males following the mother, making females most likely to be found alone with their calves in the shallows. So why is this observation important? Dr. Craig suggests that it is unwanted male attention which causes the females and calves to increase their swimming speed, in turn requiring the mothers to supply their calves with more milk to compensate for the extra energy they’ve used. Since the females aren’t feeding in Hawaii, the researchers theorize that these female Humpbacks are actually seeking shallow water not to avoid predators…but to avoid sexual harassment from male Humpbacks! And if the females find this tactic effective when they’re caring for calves, maybe they’ve learned to use it any time they’re being pursued (is this what was going on during today’s Wake up with the Whales Cruise??).