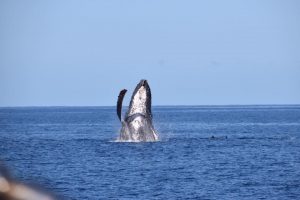 Hope you had a wonderful weekend. Ours started out very peacefully with multiple sightings of 7 different Humpbacks on Friday’s Wake up with the Whales Cruise. We watched as each surfaced, spouted several times, and sounded. We got a couple of great fluke sightings, and were pleasantly surprised when one whale decided to surface just 70 yards from our idling boat. Our Friday Mid-Morning Cruise began with 2 Humpbacks, who were quickly joined by a third. We watched as the trio was joined by a pod of Spinner Dolphins — and all these cetaceans stayed together for most of our cruise. We also got to see a huge breach right at our bow, and heard some very loud singing through the hydrophone. Interestingly, we also saw a large pod of Spinner Dolphins during our Snorkel and Whale Watch Adventure Cruise (probably the same pod from the morning). We got some great Humpback viewing too — at one point a whale swam directly under us and close enough to the surface that we could see him clearly…and we also got several views of other spouting whales, including one who popped up about 50 yards from us. Guests on our Whales & Cocktails at Sunset Cruise spent most of the trip with a pod of 2 or 3 Humpbacks (we couldn’t tell for sure) who were breathing at the surface a lot. The only competitive behavior from them we were able to witness was a HUGE head lunge…it was almost a breach. But based on their spouting frequency (they were breathing hard), we guessed they might have been interacting really actively underwater.
Guests on Saturday’s Wake up with the Whales Cruise saw about 10 different Humpbacks.We spent most of our cruise paralleling a pod of two who were joined briefly by a third whale. When the third whale arrived, it seemed to spawn a bit of competition as the whales changed breathing patterns and directions, and even did a few pec slaps. Ironically, the most intense surface action occurred right after all of our guests de-boarded. Everyone onshore (and our crew still cleaning up on the boat) got to watch two whales just north of the bay breach simultaneously and singly for about 15 minutes — eliciting lots of oohing and aahing from all of us…fantastic! The whales kept at it, and guests on our Snorkel & Whale Watch Adventure Cruise got to see several breaches and some pec slaps from those two before they exhausted themselves and swam away. Meanwhile, on our Mid-Morning Cruise we met Mom Humpback and her baby almost as soon as we left the harbor. We got to see Mom breach once, but, not to be outdone, the calf breached multiple times right in front of us. We saw at least 6 other Humpbacks during the cruise, but we couldn’t take our eyes off that Mom/Baby duo.
Finally, on Sunday’s Mid-Morning Whale Watch we headed out to watch a pair of spouting whales but then got sidetracked by a different pair of whales who were breaching simultaneously further out to sea. By the time we got to them they had stopped breaching, but they were surfacing, spouting, and sounding frequently and simultaneously, so we got lots of great views of them. On the way back to the harbor, we found the pair of Humpbacks we had been watching originally, and got to watch them spouting at the surface a couple of times.
Mahalo,
Claire
Ocean Sports Whale Fact of the Day: Though measuring the length and weight of a Humpback’s internal organs is not really an exact science, it’s been estimated that the intestines of a fully grown Humpback whale are about 200 feet long (approximately 4.5 times the length of his body).