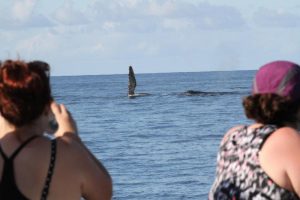 Our weekend started out with wind speeds in the 35 – 40 mph range…which makes getting to the active Humpbacks a little more difficult. But saying that, guests on Friday’s Wake up with the Whales Cruise got quite the show. In total, we saw 5 different whales, but were all mesmerized by the 30 minutes of peduncle throws, pec slaps and breaches that all took place just 200 yards from the boat. Our Mid-Morning Whale Watch Cruise began with sightings of a pod of Spinner Dolphins who decided to accompany us for awhile. At the end of the cruise, all of us saw two whales spouting and then sounding (giving us great views of their flukes), and some of us saw a third whale off to the side who spouted and then slipped under the surface of the water.
On Saturday’s Wake up with the Whales Cruise, we visited with 3 different pods of whales, including a pod of three who surfaced about 90 yards from us. We got to see one pectoral slap from them, and lots of fluke shots. Guests on Saturday’s Mid-Morning Cruise got some good views of a pod of two whales who surfaced right next to the boat. They were doing 19 minute dives, so we got to stick around and watch them 3 different times.
On Sunday’s Wake up with the Whales Cruise we spent most of the cruise with a pod of two big adult humpbacks who were rolling around on the surface a lot. In the beginning of the cruise, one of them surfaced at our stern, so we all looked back to see him..Which meant that we all were looking in the right place to witness his buddy doing a full breach. We also got to see a huge peduncle throw and a tail lob from these whales. Oh, and apparently those whales were as interested in checking us out as we were in checking them out, because at one point, they turned right towards us before swimming down our starboard hull.
Finally Sunday’s Snorkel and Whale Watch Adventure Cruise lived up to its name when we saw spouts on our way back to the bay after snorkeling and lunch. It turned out that the spouts were from our absolutely favorite trio…Mom, her baby, and an escort! Baby was really small, so he was on the surface a lot, and Mom actually joined him for frequent surface spouts. We didn’t see the escort as often (but we could tell that he was bigger than Mom…so he must have been older). This was the first Mom/Baby/Escort pod we’ve seen this season, so we were really excited. We’ll explain more about the role of the escort in our Facts of the Day later this week.
Mahalo,
Claire
Ocean Sports Whale Fact of the Day: Just in case anyone ever asks you, you can say with confidence that Humpback whales have beautiful brown eyes. Each of their eyeballs weighs, on average, 2.16 pounds. Human eyeballs weigh about a quarter of an ounce.