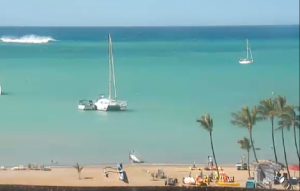 Another “horrible” winter day in Hawaii!

It sure felt like winter on Thursday…the temperatures were in the upper 70’s, the wind was blowing, and the surf was up (check out the photo to see our version of “winter”). But of course “winter” in Hawaii can be a cause for celebration, and we didn’t let a little wind stop us from seeing the whales.
Guests on our Wake up with the Whales Cruise spent most of the time with 2 different pods of two Humpbacks. In both of the pods, the whales seemed to be content with their partners (at least we didn’t see any evidence on the surface of competition). We watched them spout and sound multiple times as they cruised along the coast.
Up in Kawaihae, we were available to avoid some of that winter wind by heading north out of the harbor for our Mid-Morning Whale Watch Cruise. Almost right away we were joined by a small pod of spinner dolphins, but as we saw a couple of Humpback spouts further out, we continued cruising up the coastline. Shortly after we arrived in the area where we thought the whales had been, a lone whale surfaced, spouted once, and sounded, showing us his distinctive all-white flukes. It seemed kind of strange to see just a single blow, so we waited in the area, and a couple of minutes later two whales surfaced, spouted about 6 times and sounded. This time we got to see our very recognizable all-white fluke whale, accompanied by an all-black fluke whale. 10 minutes after that, a pair of whales surfaced far to our south — almost too far for “our” whales to have traveled in that amount of time. But we headed over to where we thought they might be, and sure enough, they both surfaced about 40 yards from us….and when they sounded, we could tell by their flukes that we getting to see “our” whales one last time!
Mahalo and have a wonderful weekend. I’ll send out our next sightings recap on Monday.
Claire
Ocean Sports Whale Fact of the Day: In the early part of the 19th century, whales were hunted for more than just their blubber (which was used primarily as lamp oil). The meat was used mainly for fertilizer, the baleen was used for umbrella and corset stays, and their organs were processed to extract vitamins.